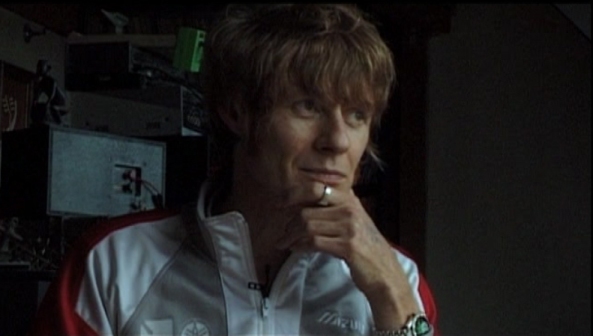 [This article was originally published by Brainwashed.com. I used the name Anna Station as an allusion to the Novation A-Station.]

If you’ve listened to music in the past 30 years, or even turned on your television, you’ve heard JG Thirlwell. He’s released over 40 records under 19 different identities. He’s the Venture Bros guy. The MTV Sports voiceover man. The remix king. Foetus, Steroid Maximus, Manorexia, Clint Ruin, Wiseblood, Baby Zizanie and DJ Otefsu. From no-wave to neoclassical, minimalism to math rock; JG Thirlwell makes noise sound like pop and classical sound like punk. From sound-sculpting with Nurse with Wound to remixing Pantera; from making a video with Karen O and Spike Jonze to writing symphonies for robots, Thirlwell has been around.

The gorgeous, pouting redhead swigging wine from the bottle in 1996 was not JG Thirlwell. It looked like him, sure, but this guy was all swaggering excess and seductive charm; the real JG Thirlwell is shy, cultured and softly-spoken. He’d made the switch several years before, but now the impostor had taken over. Fuelled by acid and alcohol, he had blistered his way across the various scenes of the ’80s and ’90s until almost destroyed by his own myth. JG Thirlwell is back now, and has spent the past decade making better music than ever. With a new album, HIDE, out next month, Thirlwell has agreed to tell all: about the man I met, about the man he is, and about the extraordinary music they’ve made between them.

James George Thirlwell was born on 29 January, 1960 in Melbourne. He’s often called “Jim” but goes by “JG.” He spent 12 years at an all-boys Baptist school and hated it so much that he excelled for fear of being held back. He became withdrawn and antisocial – describing himself once as “a s***head” – and sought comfort in books, art and music.

When was the first time you remember really enjoying music?

JGT: My first musical memory is singing Viva Las Vegas to a little girl called Viva in kindergarten. I must have been three years old.

Who do you still love listening to now who you enjoyed hearing as a child?

JGT: I used to love The Monkees, particularly Mickey Dolenz’s smokin’ big band number Goin’ Down. The Monkees was the first group I ever saw, in Melbourne in about 1968.

JG’s Scottish mother took him to the UK from time to time, and he felt more at home here than Australia, where he felt culturally isolated. At 16, he graduated and spent two years at Art College where he found himself training as a teacher instead of the course in graphic design he had intended to take. Frustrated and unhappy, he amused himself with low-level mischief before fleeing to London, where his mother had once studied music. He’d packed a couple of bags, told his parents he was taking a vacation, and didn’t return.

JGT: I haven’t been there in over 30 years and I don’t miss that country. I will no doubt visit one day. I’ve never actually been invited to perform there but Kronos Quartet played the first piece I wrote for them there last year.

It was 1978 when JG arrived in London and found work as a buyer for Virgin Records. Through this he was able to keep a close eye on all new releases, as well as obtaining sound files and soundtracks on vinyl for use in samples. Example: he put a voice clip of Vincent Price on two tape loops to play back in and out of phase, Steve Reich style. He began chopping up tape clips and making charts of what pitch they’d form if he played them back at different speeds; a DIY primitive sampler.

Minimalist experimental acts like Reich, John Cage and Phillip Glass were his main inspiration, along with the post-punk acts of the day – but Thirlwell’s heart seems to be in classical music (particularly Bartok and Penderecki). He’s always claimed he “can’t really play anything well,” but he seems to compose well enough these days: he writes the music electronically and then sometimes works with an arranger to generate the score for each instrument.

On the documentary NYC Foetus (part of the LIMB release), it’s suggested that you like the impersonality of classical music. What made you decide to make (for want of a better term) rock music instead?

JG was particularly excited about post-punk experimentalism. He was inspired by the DIY ethic of the time – the tools to make your own music were available and anyone could do it if they had the ideas. He regularly went to see bands such as Throbbing Gristle, Joy Division, Wire, Scritti Politti, and Nick Cave’s group, The Birthday Party. At first he played with PragVEC and Nurse With Wound, but then sought to create his own music.

In 1980, he set up his own Self Immolation label and eventually forged a manufacturing and distribution deal with the fledgling Rough Trade to put out his records – each released under a variant of “Foetus” (Foetus Under Glass, You’ve Got Foetus On Your Breath, etc.) – a word he loved for its baffling taboo status and weird spelling, as well as its connotations of potential. Around this time he began working with Einstürzende Neubauten, financing and helping to assemble Stratagien Gegen Arkitekturen Volume 1. As his own manager, agent and publicist (as well as performing all the instruments and designing the sleeve art), he created the aliases to make the idea of selling his music more palatable. As he told in NYC Foetus, he didn’t want to be touting his music to people saying, “Please will you play my record?”

On the press releases he wrote, he pretended Foetus was Frank Want, Phillip Toss and two Brazilian statistics collectors; he claimed Scraping Foetus off the Wheel was Frank Want and Clint Ruin. Frank Want is credited on releases by Orange Juice and The The. (Matt Johnson’s one of his closest friends: he’s performed with The The playing synthesizer, guitar and even the kitchen sink.) These characters were inspired by the mythology The Residents built up surrounding their releases, and his early press releases advised “the Foetus family prefers to retain a degree of anonymity so the observer can have no preconceptions about the music via the appearance of the perpetrator, the artefact must be judged on merit alone…”