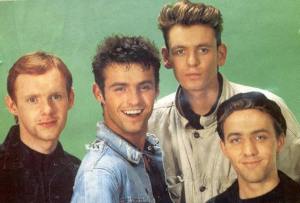 So these 30 days are not going to be consecutive: that much should be apparent. Day 2 is a tricky one, though, because on what basis do I choose my least favourite?

I once was sent along to review a death metal band, and that wasn’t really fair because I don’t even like death metal, but this band … well, they couldn’t sing, couldn’t play, there were no discernible rhythms or hooks or anything whatsoever to like or even admire about them. Even though I wasn’t into grindcore, I could hear the support act and think “they’re really good at what they do” – I could admire the ferocious tightness of their ear-splitting groove – but this lot? Wow. It was the musical equivalent of Battlefield Earth: so bad, it’s not even funny. The band broke up after I wrote the review. I got death threats. The editor got death threats. I got fired.

I did ask a death metal fan friend of mine if, by the standards of the genre, I had been unfair and they were considered exemplary of their type.

Even though it was hands-down the worst musical experience of my life, would I call one of their tracks my least favourite song?

Probably not, because the trauma-solving part of my brain has blocked them out. I honestly can’t remember what they sounded like, other than “f***ing dire“.

Then I reach my problem when it comes to being horrible about bad music: I feel really mean. I do feel a twinge of guilt about my oh-so-witty tirade against that band, even if it was some of my cleverest writing, because I was terribly unkind. I don’t like being nasty about things that people have worked really, really hard on, even if the result is eye-watering.

There’s always the “your-mileage-will-vary” thing, too. I wrote a review recently, and on the page of the person who’d commissioned it, people had written negative comments to indicate their lack of interest in the act. It reminded me of the standard response in game-modding communities, when someone wanders into a release thread and says “I don’t like this sort of thing so I won’t be downloading this”: nobody cares that you don’t like it. You have to think about what purpose the comment serves, and that really is just asking for attention rather than contributing to the discussion. Saying it’s bugged or has some other problem is useful to the player and to the person who made it, so that’s constructive. Thus it is with music. So was my sledgehammer review of the woeful death act in the same really unhelpful category? Probably. Almost certainly. But my opinion had been asked and I gave it.

Nobody’s asking my opinion now, but it took me less than 10 seconds to pick my least favourite song, and if it’s your least favourite too, it might at least be cathartic to know you’re not alone in your contempt. I needn’t feel guilty about this one. It spent 15 weeks at number one in the UK chart. Fifteen f***ing weeks. It felt like years! Eventually, everyone was so sick of it the band themselves deleted it.

It’s the sheer cloying insipidness of it, those elevator-muzak harmonies, and – worst of all – that nauseating “funky” break before that even more cloyingly insipid bridge. I hate it even more than I hate Bryan Adams’ Everything I Do, which takes some doing. I thought I’d done vomiting for the moment, but I feel a technicolour yawn coming on.

My least favourite song of all time is:

Love Is All Around by Wet Wet Wet