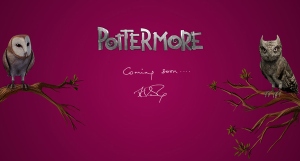 Pottermore, the much-discussed secret Harry Potter project, has been described today by JK Rowling as being an interactive website featuring 18,000 words of footnotes to her books. The site, opening in October, will allow fans to read in-depth biographies and other background material that did not make the Harry Potter books.

Pottermore will be free, but act as a portal for digital downloads on sale at the site. Yesterday’s “leaked” memo referred to marketing activity surrounding the site’s launch.

Registration at pottermore.com opens today, in advance of special previews for one million fans in September. The content will initally just be for Philosopher’s Stone, but more items such as interactive games will be later added for the whole series.

Personally, I’m a little disappointed: I was much more excited by initial rumours of a theme park ride. Oh well, eh?