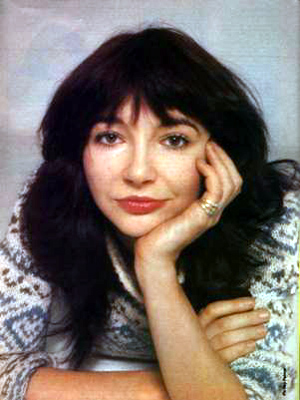 I might have been a mischievous little minx, generating controversy over at Collapse Board, but frankly I blame ET for making the flippant remark in the first place. “Mostly only art created by women has any validity”? Absurd! Yes, we can all point to talented and able female rock stars, but where are the trailblazers? That was the crux of my argument, in an itty bitty nutshell. I could say the reverse about pop music, where it’s the boys who lag behind.

Then my pal Shannon jumped in with a name: Kate Bush. Whether it contradicts or supports my argument depends largely on whether you classify her as “pop” or “rock”, but I’m going to give him this one cheerfully because Kate Bush was like nothing else that came before.

And I don’t just mean that in the women-didn’t-grab-their-crotches-before-Madonna-did way. I mean that even now nobody really knows what to call Kate Bush’s music – it stands alone and apart on its own terms. It just seems to have been directly and personally inspired, and not just a slightly varied iteration of an established pattern.

(You’ll have to forgive the past tense here – I haven’t heard her newer material.)

Crucially, she influenced – other people get compared to Kate Bush – but for the most part they’re not mere copyists. Tori Amos is post-Kate Bush in a way that other people aren’t post-Tori Amos. She wasn’t just an influence to quirky young girls – her songs have been covered and sampled and generally ingested by an entire generation. Part of that broad appeal was in her unselfconscious oddness (could Thom Yorke have done his jerky ballet dance without her?), but a lot of it was in her willingness to explore all aspects of the human condition, far beyond sappy love ballads and songs about being angry or afraid.

This is ferociously intelligent music that is very easy to listen to. Hearing it now, it seems impossible to believe it could have been any less popular than it is, and it feels great to know that it hasn’t been languishing away in some dark corner all these years, but enjoyed by millions, as it should be.

Hey, if people want to “prove me wrong” by pointing me in the direction of truly great music, keep it coming!