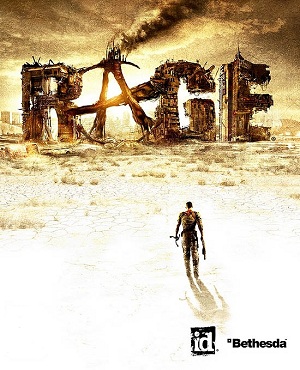 id Software’s Rage was another game I part-played and really enjoyed in 2011. At first glance, the reference points might be Fallout 3 or – more accurately – Borderlands, but though there are some elements of the latter, it was Bioshock I was most reminded of in terms of actual gameplay.

The wrapping is very Borderlands, with sparsely-populated post-apocalyptic settlements hewn together from endless supplies of brown metal. It’s set in the near future, following the impact of asteroid 99942 Apophis, and you play the sole survivor of a malfunctioning “Ark” cryo-pod. Aggressive mutants prowl the desert countryside, and those and “the Authority” are the main antagonists in the game. Predictably, you end up joining the Resistance to thwart the Authority’s evil plot to subjugate the remaining survivors of the asteroid crash.

Like Bioshock and Borderlands, you can loot corpses, manage your inventory and collect different types of ammo – but there’s also a hefty Burnout-style driving theme. I don’t really like driving levels, but this handles better than most and manages to avoid the “fat man on a unicycle” (thanks, Yahtzee) syndrome that blights many vehicular diversions. There’s also a fun gladiator level that will delight fans of Fallout 3‘s Pitt expansion (and the Mad Max films, of course.)

The graphics use the same trick that was later deployed in Skyrim, where some textures are very high resolution and some very low resolution, in order to squeeze the maximum “ooh” factor out of the ageing Xbox 360. It makes for a generally beautiful-looking game – provided that you don’t look too closely at some background details. John Goodman is the main “star” voice actor, playing your character’s friend, Dan Hagar.

The main drawbacks in the game are having save points too far apart, and a treacherous environment that makes it far too easy for your character to fall into a hole and die – forcing you to replay the last ten minutes to get back to where you just tripped over. It’s not a huge hate, though – just something to be aware of when playing.

Rage is another game going cheap in the seasonal sales, and another I’d unhesitatingly recommend.