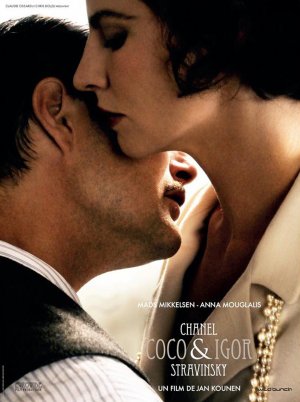 I once told my husband that if he ever strayed I’d kill him and I’d do the time. Regardless of whether I’d carry out that threat, I wouldn’t accept the situation “with a mixture of magnaminity, bitterness, and compassion”, as Stravinsky’s wife is said to have borne his affairs. I just couldn’t imagine being so passive – or occasionally passive-aggressive – as the composer’s put-upon spouse. Then again, I can’t really understand the other characters in this film, either. Stravinsky (Mads Mikkelsen) is a self-absorbed narcissistic jerk and Chanel (Anna Mouglalis) is a preening, predatory egomaniac.

Based on the 2002 novel Coco & Igor detailing the alleged affair between the designer and the composer, the film begins in 1913 Paris, with the legendary opening of Rite of Spring. Famously, the unorthodox choreography and abrasive music (it basically set the blueprint for metal) upset those expecting Swan Lake and the show turned into something of a riot.