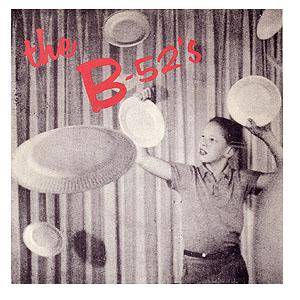 What’s the word I’m looking for? Congruence? Confluence? A meeting-point where the weird and the popular align. I’ve been impressed by that a lot lately – how curveball acts like Dutch Uncles and Everything Everything have become as commercially successfully as they are acclaimed.  Even so, even 35 years on, there has never been anything quite like Rock Lobster.

My 44th favourite song of all time, Rock Lobster reached number 56 on the Billboard charts in April 1978. It got to number 37 in the UK in 1979 and number one in Canada in 1980. It was eventually reissued in 1986 in the UK, where it reached number 12 in the charts. John Lennon credited the song with reigniting his music career, following his post-Beatles hiatus. Early Commodore Amiga 500 units had “B52/ROCK LOBSTER” etched on the main circuit board. It’s one of those songs that is instantly memorable but not-quite-placeable. Surf-rock? Post-punk? It’s music as made by aliens when your aliens are the ones from Earth Girls Are Easy.

OK, if we want to talk weird and popular, you don’t get weirder and more popular than Kate Bush’s Wuthering Heights, number 43 on my list.

Not much to say about that one. Again, it was from 1978, the first single she released, two years after being “discovered” by Pink Floyd’s Dave Gilmour (he liked the 16 year-old’s demo, but thought it too rough-sounding and paid for a better recording). It was originally rumoured that Gilmour played the solo on the song, but the part was played by Ian Bairnson (known for playing with Alan Parsons) – engineer Jon Kelly regretted not making the solo louder in the mix.

The song is based on the 1970 film version of Wuthering Heights, which prompted her to read the book (which she quoted in the lyrics). There are two versions of the video: the indoor, white-dress version is the British version whereas the red-dress, outdoor video accompanies the American release.

Not so outrageously weird, but definitely unusual is number 40 on my list – the first rap-metal song I recall hearing. The original Aerosmith song was released in 1975, peaking at number 10 as part of the band’s original run of hits. The 1986 genre-spawner was listed as a cover by Run DMC, on their album Raising Hell – producer Rick Rubin played the original song to the rappers and suggested the cover, towards which only Jam-Master Jay was initially enthusiastic. It was the first rap song to break the Billboard top 5, and popularised the idea of mixing rap and rock – though Afrika Bambaataa had been mixing in the likes of The Beatles since way-back-when. The song’s title stems from a joke in the Mel Brooks comedy Young Frankenstein.

Finally, it seems weird to imagine that The Sisters of Mercy bothered the likes of Top of the Pops, but there you go: Goth was fashionable once! The “weird” part is how they roped in Middle Eastern singer Ofra Haza for their 1992 remix. Number 39 on my personal list, Temple of Love is one of those songs it is impossible to imagine anyone failing to love. I wasn’t alone in my devotion: the song reached number 3 in the UK charts.

One comment on “Top 100 singles of all time: The B52s, Kate Bush, Aerosmith, Run DMC and the Sisters of Mercy”