There’s a photo in the middle of the book from spring 1988 attributed to “unknown”, which I recognise, because I had it on my wall. This would be my cube wall at my first job, which was a shrine to the industrial rock legends of the day – Al, Trent, Ogre … the people in this book. You may remember Chris Connelly – the skinny Scottish self-styled also-ran eternally upstaged by his bandmates – from such freakshows as Ministry, RevCo, Fini Tribe, Pigface, Murder Inc and The Damage Manual. And he’s about to tell you everything.
END_OF_DOCUMENT_TOKEN_TO_BE_REPLACED

Revolting Cocks, aka RevCo, were a side project between Ministry’s Al Jourgensen, Luc Van Acker and Richard 23 from Front 242. Richard left and Chris Connelly (Finitribe) joined, along with Paul Barker, Bill Rieflin, and anyone else they could drag into the studio. Although not every song was humorous, I mostly associate RevCo with a certain tongue-in-cheek hilarity.

END_OF_DOCUMENT_TOKEN_TO_BE_REPLACED

There used to be a stand in the Camden Market that sold bootleg cassette tapes and videos of industrial gigs. One of my many purchases was a Ministry tape of a concert from about 1990, and I played it to death. Scarecrow was by far my favourite song. Its slow heavy rhythm was somewhere between languid and oppressive; its barely audible vocals dripping with snarling sarcasm. The bit missing from the live version I had was the harmonica line in the middle, which was more vibrant in that take. No matter – almost any version of this song is one you’ll want to hear over and over, and as Him Indoors notes, it hasn’t aged a day.

After having spent the past six months reacquainting myself with the music of some of the poster-boys of my youth, I thought it would be fun to see what became of them. Some we know about: poor Kurt Cobain, or the likes of Trent Reznor who seems to be releasing something every second Tuesday. Next to him on my lurid grey-striped wallpaper (seriously, what was with that awful 90s decor?) was Al Jourgensen.

On the left, that’s how I remember him when I thought that he epitomised the ideal taste in fashion (hey, you’re talking to someone who willingly put black chipboard furniture with red plastic handles in their bedroom). I remember my straight friend Mike, who knew him, describing Al as “really sexy”, though I never really saw it under all that hair. He’s 51 now and officially disbanded Ministry in 2008, but still releases RevCo albums and works as a producer. In case you’re wondering, he quit heroin years ago after nearly losing an arm! Good to see he’s doing OK, and that Last Sucker album was actually pretty good. 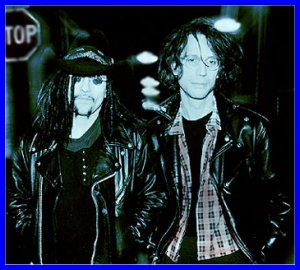 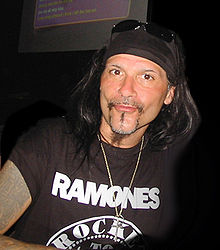 Born 30 May 1967, the Charlatans singer epitomised the non-threatening cheeky-chappy indie vocalists of the time. For about three years in my early teens, he was my idol. I may have lost interest, but it seems he didn’t: the 43 year-old is still fronting the band, who released their 12th album, Who We Touch, on 6 September this year. It reached number 21 in the UK charts.