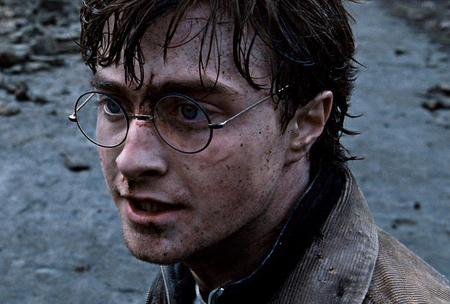 The cinematography is beautiful. It’s the first thing I notice. If the first film was glorious Disney sparkle and the sixth was eerie and blue, Harry Potter and the Deathly Hallows pt 2 goes straight for post-apocalyptic grey. It’s as bleached and hopeless as Terminator 4, but has the poetry and grace of the first Pirates of the Caribbean. It could be Gore Verbinski at the helm, and that is high praise, but fair: Potter 7 pt 2 is a very good film.

END_OF_DOCUMENT_TOKEN_TO_BE_REPLACED

“Why would I want to read a children’s book?” Him Indoors remarked, smugly, quoting some comedian who also hasn’t read the books.

How many copies now? 450 million? That’s more than … well, almost anything. The Lord of the Rings has sold 150 million copies; A Tale of Two Cities over 200 million.

Harry Potter is, quite neatly, Dickens meets Tolkein, and not a lot else. Sure, it borrows heavily from ancient myths and has quite unsubtle anti-Nazi allegory running through it. It takes a bit here and there from Narnia and has the sly, off-beat humour of Terry Pratchett and Douglas Adams. Mostly, though, it’s just Dickens’ David Copperfield with 20% more Sauron.

Sometimes – like David Bowie – the reason something’s popular is just because it’s good.

END_OF_DOCUMENT_TOKEN_TO_BE_REPLACED

So, what’s the average now? The first one was an OK kids’ flick; the second a dire abomination; the third watchable; the fourth didn’t really work as a film; and the fifth and six were spectacular. Now the seventh book is to be split in half, and the questions are whether David Yates can drum it up a third and fourth time – and whether he can make the plodding and rather incomprehensible first half of Rowling’s book into a decent movie.

END_OF_DOCUMENT_TOKEN_TO_BE_REPLACED

Hmm … doesn’t look like I mentioned State of Play before. It’s a television series I picked up very cheaply and watched through recently, sold by nothing more than having heard it was “one of the best television shows ever made”. I can’t remember where I heard that.

It was remade a short while ago as a film starring Russell Crowe, but this is the original miniseries, as directed by Harry Potter‘s David Yates. The cast is a who’s-who of quality British actors: John Simm (Life On Mars), David Morrissey (The Deal), Polly Walker (Rome), James McAvoy (Atonement), Bill Nighy (Love Actually), and Marc Warren (Hustle). Philip Glenister, also from Life On Mars, yet again plays a cynical, world-weary police detective.

Morrissey plays politician Stephen Collins, whose affair with a young researcher is exposed by her sudden death. Simm is his long-time friend, Cal, who works as a reporter. When Cal links Sonia’s death to an apparently drug-related killing, a conspiracy is uncovered that reveals corruption between the oil industry and the government at the highest levels.

I wouldn’t go quite as far as to say that it’s the best show ever, but it will certainly keep you busy while you’re waiting for the next series of Spooks. It’s got a genuinely gripping story, likeable cast, it’s got action and drama and romance, the lot. Very highly recommended.