Martin Atkins is a man on a mission. He’s looking to break a world record, and he’s pulling out all the stops to do it. In just six days, his Kickstarter campaign has received 36% of its funding target. He’s unstoppable – and his mission is most unusual.

He’s trying to break the record for the most appearances of the word “f***” in a book.

Martin’s previous publication, Tour:Smart, was hailed as “the ultimate touring manual” by Mojo and “the Holy Grail” by Kraze. As the former drummer for NIN, Ministry and PiL as well as the founder of the band Pigface and label Invisible Records, he had little difficulty pulling together people to contribute to his guides for musicians. Henry Rollins, Chris Connelly and numerous “industry” types chipped into the first, and for his sequel, he asked … me. END_OF_DOCUMENT_TOKEN_TO_BE_REPLACED

It doesn’t look like I’ve posted about Hardware, which I find surprising. This underrated little post-apocalyptic slasher flick is normally one of the first films I recommend to people. It’s inspired by a short story from 2000 AD about a robot that goes on the rampage in a post-nuclear wasteland, and is chiefly notable for its killer soundtrack and on-screen appearances by luminaries such as Lemmy and Iggy Pop. END_OF_DOCUMENT_TOKEN_TO_BE_REPLACED 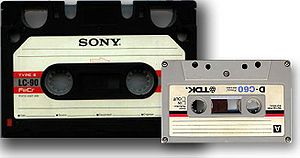 I’ve had a pile of cassette tapes gathering dust for maybe 15 years. I figured it was time to go through them. Sorting through some old belongings, I discovered an old walkman that still worked. Bingo! What would be on these dusty old tanglers? I was mostly hoping to find a phone interview I did with Nivek Ogre, or a face-to-face with Fear Factory, neither of which saw the light of day thanks to a mishap in a house move. They must have been in the other pile of tapes, which got damaged. Nope. On this one, I found …

It’s in a Smashing Pumpkins sleeve, but is actually a bootleg of Ministry in 1994. I went through a brief phase of picking up dodgy tapes – cassettes and videos – from the Camden Market. The bloke on the stall claimed to be mates with Killing Joke, and said they let him onto the stage to stand at the side to get the best footage. I never bought one of his Killing Joke tapes, but I did walk away with Skinny Puppy’s 1986 Ain’t It Dead Yet and NIN in Dallas, 1990. I’m guessing this is from that market stall. 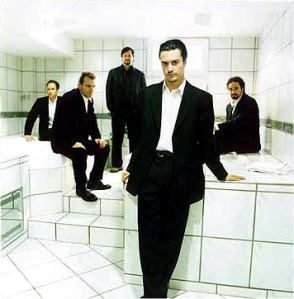 I think I’m using this post as an excuse. 1, to look at the lovely Mike Patton; and 2, to listen to a great Faith No More song.

Like most of the bands on this list, I could have picked almost any single and called it a favourite. I went through a phase of listening to their greatest hits album, which worked as an album in its own right because they’re just such a good band. (That’s not always the case – the Korn one’s downright patchy, which just magnifies their reputation as only sporadically any good.)

The single reached number 15 in the UK charts and number 23 in America’s Mainstream Rock chart. Album of the Year underperformed, selling only 213,000 copies in the US (Angel Dust sold three times that) and was given lukewarm reviews. However, its global tally was a healthy two million sales. It contained three of my favourite FNM songs: Stripsearch, Ashes to Ashes, and Last Cup of Sorrow. The latter always reminds me of Ministry’s Filth Pig.  END_OF_DOCUMENT_TOKEN_TO_BE_REPLACED

You’re wondering why I didn’t pick Jesus Built My Hotrod, right? It is the obvious choice.

But I just love N.W.O. more. It’s one of my earliest memories of clubbing. Sneaking at the age of 14 or so into a dank basement dive in Brighton, drunk on cider, arms flailing on the dancefloor to this and Nine Inch Nails and whatever else the kids were dancing to in those days. Funnily enough, I always thought that it was Ministry’s biggest single, but N.W.O. got to number 11 in the Billboard charts and was nominated for a Grammy.  It was the second single from Psalm 69. END_OF_DOCUMENT_TOKEN_TO_BE_REPLACED

Well, that would assume that I had a working radio to start with, and was a regular enough listener to know what they didn’t play that I wanted to hear.
END_OF_DOCUMENT_TOKEN_TO_BE_REPLACED

There’s a photo in the middle of the book from spring 1988 attributed to “unknown”, which I recognise, because I had it on my wall. This would be my cube wall at my first job, which was a shrine to the industrial rock legends of the day – Al, Trent, Ogre … the people in this book. You may remember Chris Connelly – the skinny Scottish self-styled also-ran eternally upstaged by his bandmates – from such freakshows as Ministry, RevCo, Fini Tribe, Pigface, Murder Inc and The Damage Manual. And he’s about to tell you everything.
END_OF_DOCUMENT_TOKEN_TO_BE_REPLACED

Too tired to blog …

Oooh, tricky one. OK, here’s one. I don’t remember “first hand” industrial music prior to the late 1980s – anything I heard that dates back further I heard many years later. There were many sub-categories, of course, but broadly if you asked me what “industrial music” sounded like I’d have said something like this: END_OF_DOCUMENT_TOKEN_TO_BE_REPLACED

New on Collapse Board

When the two old enemies embraced this week in London, many fans were wondering if the decades-long feud was finally and fully laid to rest. Would there be a Pink Floyd reunion? A new tour? A new album? Realistically, isn’t it much too late for that now? More to the point – as many were quick to remark – the band could hardly reunite since Richard Wright had died in 2008.