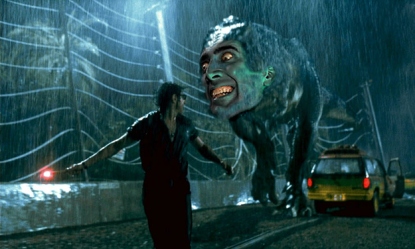 This made me laugh a lot. See, I can sympathise. My own attempts at fan art have suffered a little in the execution. For example END_OF_DOCUMENT_TOKEN_TO_BE_REPLACED

13 year-old Chloe Moretz (500 Days of Summer) admits that if she ever uttered any of her lines in Kick-Ass – filmed when she was just 11 – she’d be “grounded until [she] was 20”. Despite the movie’s title, her character Hit Girl is definitely the heroine of the film. Aaron Johnson puts in a likeable performance as average teen Dave Lizewski who, despite having no powers or training, decides one day to become a superhero. His rather embarrassing adventures put the comic strip universe into a painfully real context as he finds out that “Biff!” and “Pow!” really f***ing hurt!

The colourful language and gloriously over-the-top violence largely come from tiny ninja queen Hit Girl, aided by her father Big Daddy – played by Nicolas Cage giving his trademark one-expression performance. Still, we’re not looking for Oscar wins here, and the laughs come thick and fast – many of those from sidekick Red Mist (Christopher Mintz-Plasse). Any film that features a bazooka is generally worth watching, and put that into a frame with a tiny tot who slices her way through villains like Christian Bale in Equilibrium and you have something you really won’t forget in a hurry.

A sequel is in the works, and that’s a good thing.