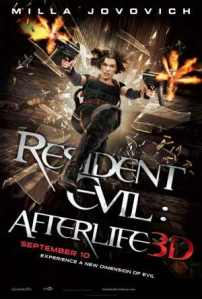 B-Movie King Paul W S Anderson directs B-Movie Queen Milla Jovovich in the fourth installment of the popular low-budget game adaptation franchise. B-Movie Princess Ali Larter (Final Destination) again provides backup, this time joined by her on-screen brother Wentworth Miller (AKA the hot guy from Prison Break) as Chris. He does such a lousy job of playing Chris (or, to be fair, the character is so lousily written) that it was only after the film had finished that I realised that this was supposed to be the hot guy from the video game.

After the made-for-3D opening shootout (shame I missed that – having gobs of blood flying through the air at you in glorious technicolour would presumably be quite fun), Alice (Jovovich) goes on the hunt for the mythical Arcadia, a safe haven from the zombie apocalypse.

Finding a deserted beach at the given co-ordinates, she discovers an amnesiac Claire (Larter) and brings her to LA where they take refuge in a deserted prison with some other survivors. Predictably the zombies find a way in and it’s nom-nom time. The survivors race to reach safety before they’re all gobbled up by the brain-munchers.

Where to begin! First of all, there are two things that ruin all zombie movies for me.

One: if there are millions of zombies and only a handful of humans, what do the zombies eat? Other zombies? It’s supposed to be several years after the outbreak – how come they haven’t starved to death by now?

Two: if zombie-ism is an infectious disease, why don’t you get infected when you shoot one?

Now let’s move onto RE4 specifically.

I’m going to gloss over the idea that Claire – last seen in Nevada and then Alaska – would find her brother among the first group of survivors she runs into, thousands of miles away in Los Angeles. Movies do this all the time. I’m not going to ask how she survives both crashes. I’m not even going to take issue with Hollywood Amnesia, which I’m reliably informed bears no resemblance to actual amnesia whatsoever. What really gets my goat is that there’s no explanation given in the film as to why the bosses (bigger-and-uglier-than-usual zombies) drop loot (coins) when they die. Yes, it’s funny, but why?

There’s then the issue that Big Ugly Zombie seems impervious to bullets – this is demonstrated several times – so why does Alice’s bullet suddenly work at the crucial moment?

Once we reach Arcadia, that’s when my brain really goes into meltdown. I’m not going to even start with that: none of it makes any sense whatsoever.

Also, why is it that whenever we go into big experimental-research-type facilities, everything is white? It would cost a fortune to paint a room of that size, and I have a feeling the apocalypse was already underway when those experiments started, so it would be unlikely that anyone would take the time and expense to use the world’s last remaining paint supply to decorate a hangar-sized lab in Dulux’s finest.

I get that Albert Wesker (Shawn Roberts) is supposed to be the cool villain, and the reason for him wearing sunglasses indoors is revealed when he takes the glasses off, but surely someone in real life would have said, “Why are you wearing sunglasses inside? You might think you look cool, but really you look like a bit of a twat.”

But being the cheeky minion of an evil overlord, you’d probably find yourself dying in an unnecessarily gruesome fashion shortly afterwards.

HOW IT WOULD HAVE ENDED

The zombies would have run out of people to eat and starved to death, allowing the apocalypse to run its course in a matter of months, leaving the uneaten survivors to … pursue singing careers or whatever.

Resident Evil: Afterlife took nearly $300 million on a $60 million budget, so it’s fair to expect a fifth film (off to Africa?) to follow. I should also mention that RE4 looks absolutely beautiful – it’s a glorious-looking music video that is just let down by its nonsensical script. Let’s hope the zombies haven’t nommed Anderson’s brain when it comes to writing RE5.